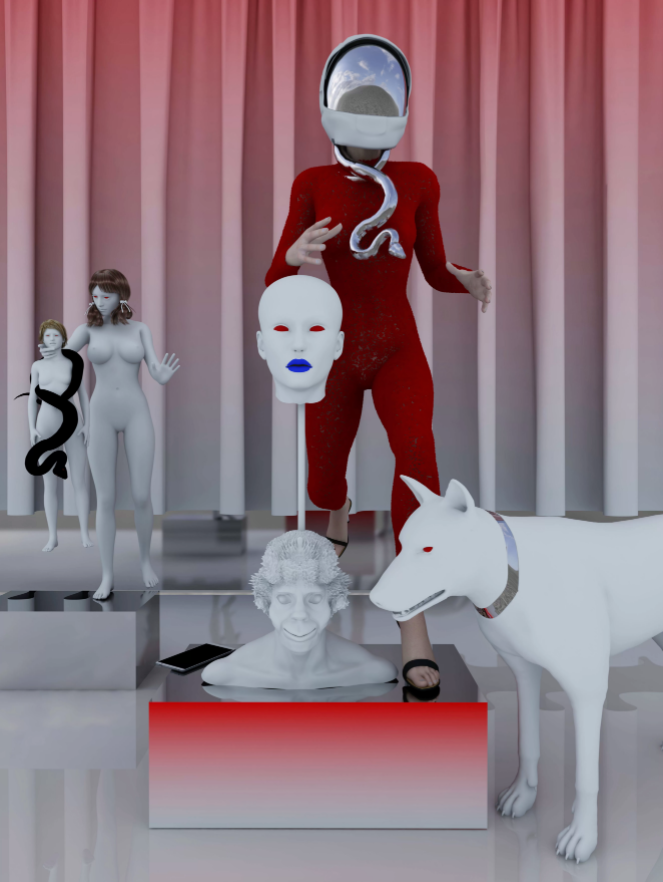 The post-Fordist exuberant production and accumulation of objects lead to some degree to what Lucy Lippard and John Chandler called in 1968 ‘The Dematerialization of Art’1. In recent times, the attitude to privilege the idea over the art-object is increasingly supporting time-based conceptual works, socially engaged and ephemeral practices and arguably effective temporary projects and interventions. In contrast to new multidisciplinary practices, a contemporary “hangable” artwork nowadays struggles to still have an impact on society; this seems to increasingly advocate for processes and hybrid forms of expressions over the physical stillness of the art-object.

Olga Fedorova’s ‘Generic Jungle’, the first UK solo show of the Russian-born artist at Annka Kultys Gallery in London, magnificently challenges the traditional features of a contemporary posseassable artwork, including technologies to innovatively expand an image’s own limitations. By using a lenticular printing technique, Fedorova uniquely endows the audience with a multiplicity of perspectives in a single artwork. The artist gives a glimpse into innovative ways to expand the artistic discourse around images while examining new relations between work and audience.

For centuries, artists have been exploring how to represent depth and three dimensionality on a flat surface to create the illusion of space in a way that mirrors the natural through realism. In a time when visual narratives were the priority for a mostly analphabetic audience, paintings were not expected to depict the real and were used more as symbolic and stylised form of expression. With its first treatise in 1435 by the Italian architect and Art theorist Leon Battista Alberti in De pictura (On Painting), perspective was the technique used to apply geometric rules for the construction of spaces in figurative art. An illusion of perspective has been developed in the 1930s by the US professor Victor Anderson, who produced the first lenticular image which became popular in the 1960’s and 1970’s when large corporations grasped its advertising potential. The Rolling Stone’s album Their Satanic Majesties Request is a precise example. The lenticular printing is a multi-step process which uses several images which are sliced into strips and interlaced together. A plastic sheet containing a set amount of linear prism-like lenses is then placed on top, perfectly aligned with the images to ultimately generate the desired three dimensional illusion. Depending on where the viewer is standing, each lens acts as a magnifying glass which gives a stereoscopic effect.

The booming of digital technologies, sees the advancement of 3D, 4D and VR applied to new immersive Art forms, hybrid methods of display and collaborative processes. Art exhibitions and collections are now facing the challenge of including glitches, websites, moving images and digital renders, to the traditional media of painting, sculpture and installation. Most of the time however, the screen is still a limit, representing to some extent a flat surface which separates us from what is real. Notably, lenticular images are found in kitsch memorabilia and gimmick advertisement, although also used as art form to enhance the sculptural materiality of a printed surface – as seen in the work of artists such as Roy Lichtenstein, Peter Blake and Damien Hirst.

Fedorova’s work begins in the virtual space of the computer, using three-dimensional digital rendering to create forms and creatures inserted into aseptic landscapes and metaphysical ambiences – eventually lenticularly printed. Broken statues, bestial busts and oneiric figures are juxtaposed with a futuristic aesthetic borrowed from popular culture in which i-Phones, helmets and gas masks coexist in pristine surgical compositions. The human presence is seized in avatars-like bodies, identified by feminine traits often wearing high heels. These characters either lie on gynaecological tables or futuristic pods – stand on plinths or ice blocks. Poetic yet disturbing, the feeling of feminine power and rebellion is intertwined with a surrealistic imprint, suggesting De Chirico’s atmospheres melted with a fragmentation dare to the Cubists. Predominantly feminine, the composition leaves space for male representation only through an incarnation of machismo into wild animals such as gorillas, dogs and crocodiles. The pronounced political commentary on global surveillance and capitalistic  dominance lies behind the indulgent symbolism, which sees in the use of the serpent its outmost precedent.

The actual perception of movement generated by the lenticular images transforms the gallery space into a new virtual ambient, in which the audience is prompted to an individual performance while interacting with the work. Each image maintains a vibrant impact of the viewer’s perceptual tools, becoming an agglomeration of quasi-sculptural elements which narratives reside in the public’s personal experience. Fedorova’s acute artistic sensibility in uniquely applying digital technologies to amplify the real-life impact and experience of a work gives the art-object a new total intellectual fetichism.