Curated and produced by myself and Liz Counsell, in association with Cambridge Junction and supported by Vision Mixers initiative, Arts Council England and Unlimited.

‘I’m Here. Where Are You?’ is a celebration of disability arts across the East of England. The one year project includes focus groups and participatory workshops with those less able to access arts provisions, culminating in a two-day festival at Cambridge Junction. Showcasing the best of disability arts in the UK and the workshops’ outputs, the festival will address general audiences and professionals through performative and discursive formats.

Kristina Veasey is a visual artist drawn to things people pass by. She is interested in the visual and human detail; giving new perspectives to familiar landscapes, exploring commonalities and differences between/within communities.With a tendency to flip negatives into positives she finds celebration amongst challenge, beauty in mundanity; often incorporating humor and surprise within her work.

My Dirty Secret! an experiential piece by Kristina Veasey, born from her frustration as a disabled person battling with housework.Through humour and surprise, this installation prompts visitors to observe the everyday in new ways. Will you be so swift to vacuum under the sofa, or pause to re-imagine discarded treasures beneath? My Dirty Secret! is an Unlimited Emerging Artist Commission supported with funding from Spirit of 2012. It has previously been shown at DC1 Gallery, Eastbourne, Apthorp Gallery, ArtsDepot in North Finchley and programmed as part of the Southbank Centre’s Unlimited Festival.

The ‘DWP Deaths Make Me Sick’ Shrouds were created as part of live performance piece, A Very Queer Nazi Faust. Made from recycled bedding, the shrouds are giant pages in John Faust’s unfinished masterpiece. The shrouds where on display in Parliament on the 13th Feb at lobby of MPs aimed at getting DWP to adopt ‘First Do No Harm’ as policy

The Goldilocks Mixer is a sound installation by Felix Peckitt that challenges audiences and participants to think about how sound can welcome or isolate people in shared spaces like cafes, theatres and libraries.

You approach the installation. Through headphones sounds greet you from all sides. Traffic, conversation, machinery, music. On the table are objects which shift the balance of the sounds in the space.
Can you find your ideal soundscape, where the balance is just right? Will you discover your Goldilocks Mix? Or will you have to compromise…

Owen Lowery is a former British Judo champion who suffered from a spinal injury while competing and is now tetraplegic. Owen’s latest project, Transitions, involves poetry and film, and considers the nature of transition, both from a personal perspective, and in relation to nature, migration, sport, history, and other areas

Owen’s poetry has appeared in Stand, PN Review, The Independent, The Times, and The Guardian. He has published two major collections, Otherwise Unchanged, (2012), and Rego Retold (2015)- Owen has performed at venues such as the Southbank Centre, The National Theatre, Belfast’s Lyric Theatre, Liverpool’s Bluecoat Theatre, Manchester’s Whitworth Gallery, Royal Exchange theatre, and Rylands Library, the Arvon Centre in Hebden Bridge, the Play House Theatre in Salisbury.

INDOORS TOO MUCH + CONOR A: Learning To Swim On An Ironing Board

Especially when real life is being indoors too much with fibromyalgia, an illness with too many syllables to be anything other than shit and possibly contagious. Stories are really needed because as a narrative device fibromyalgia is pants. Yes, there’s lots of dramatic pain and ennui-inducing fatigue, but there’s no real back story, no concrete arc and no triumphant conclusion.

And, anyway, disabled spoken word artist Conor A wanted to tell a different story. Learning To Swim On An Ironing Board is the story of getting better at not getting better, therapeutic eavesdropping (not a widely used therapeutic tool, but what you can expect when your therapist’s business card says Terry the Therapist), and how eavesdropping helped him change how he relates to the world.

A powerful duet between two exceptional dancers – Joel Brown (Candoco Dance Company) and Eve Mutso (former Principal Dancer of Scottish Ballet) – as they explore their different strengths and vulnerabilities. 111 is the number of vertebrae Joel and Eve have between them… hypothetically. Eve moves like she has a hundred while Joel’s spine is fused and he jokes he only has 11.

JACKIE HAGAN: This Is Not A Safe Space

Jackie Hagan has council estate bones, one leg and a cob-on about class. In 2018 she interviewed 80 people living on disability benefits and in this hilarious and deeply effecting solo show she sensitively explores our presumptions, fears and passions regarding who in society deserves our respect, help and how we should deliver it. A poetic comedy about disability and life on benefits. Featuring the real voices of proper skint people, a spot of stump puppetry and deeply poetic comedy. Full of warmth and free crisps, sensitively handled and very funny. 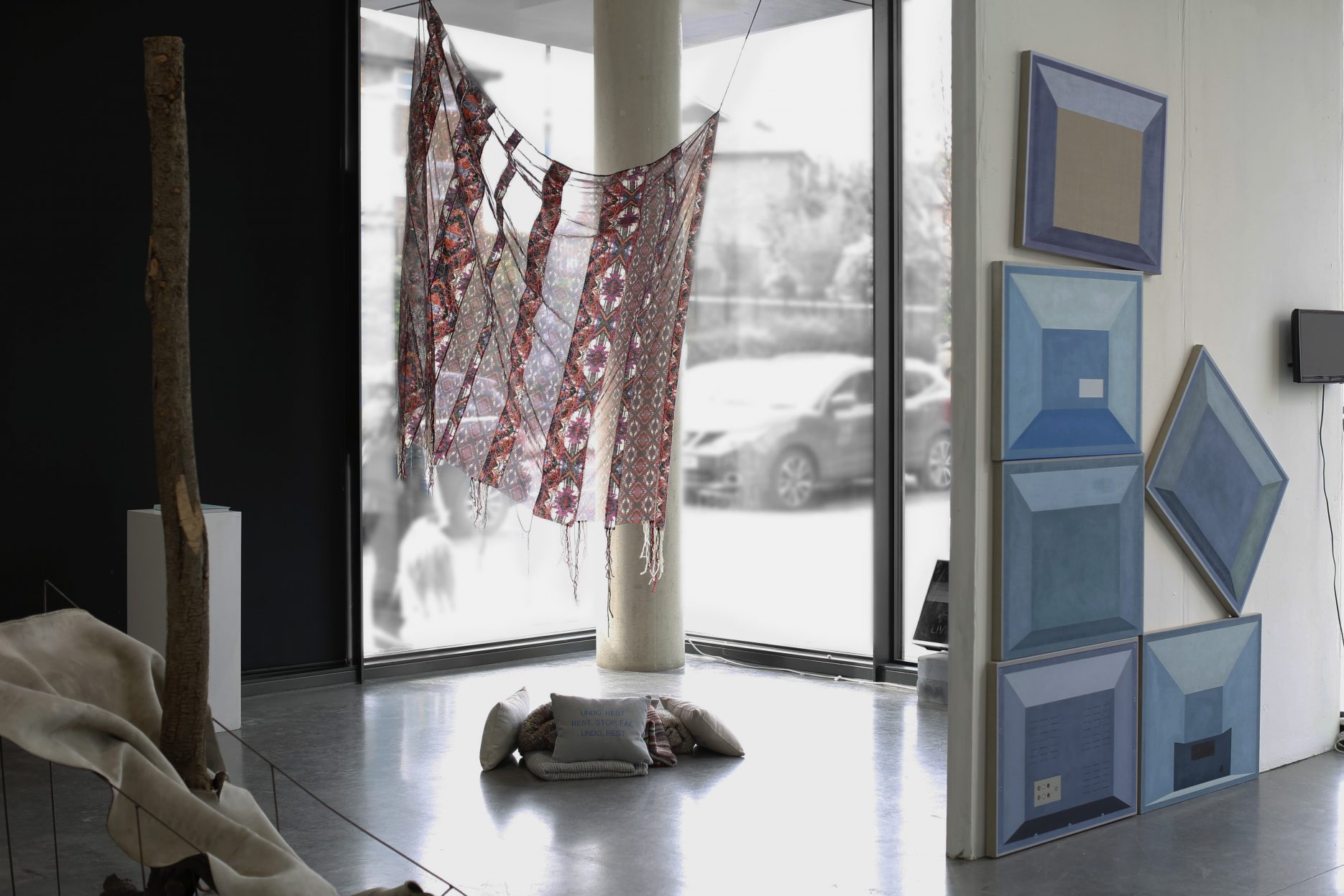 There’s something lurking in the shadows that might be interesting features the most wide-ranging enquiries of 39 MPhil and PhD students from the RCA’s School of Arts and Humanities. From the 15th until the 23rd of March, the Dyson Gallery and its surroundings will be inhabited by researches in different stages and forms – bringing the artistic process in contact with the external world. Showcasing artworks in various media: from painting to sound, moving image, sculpture and performance, the audience will witness new-born ideas and intentions, reimagined experimentations and grounded practices.

Questioning the dissonant nature of displaying a wide range of artistic processes in the same space, There’s something lurking in the shadows that might be interesting highlights the commonalities belonging to the figure of the artist as researcher, and the subjective reactions which can occur when presenting the product of an investigation to wider audiences. Speaking to the search in research, peering into the shadows in order to expose something to light: the exhibition is a call to the overlooked, the subtle, and the raw. 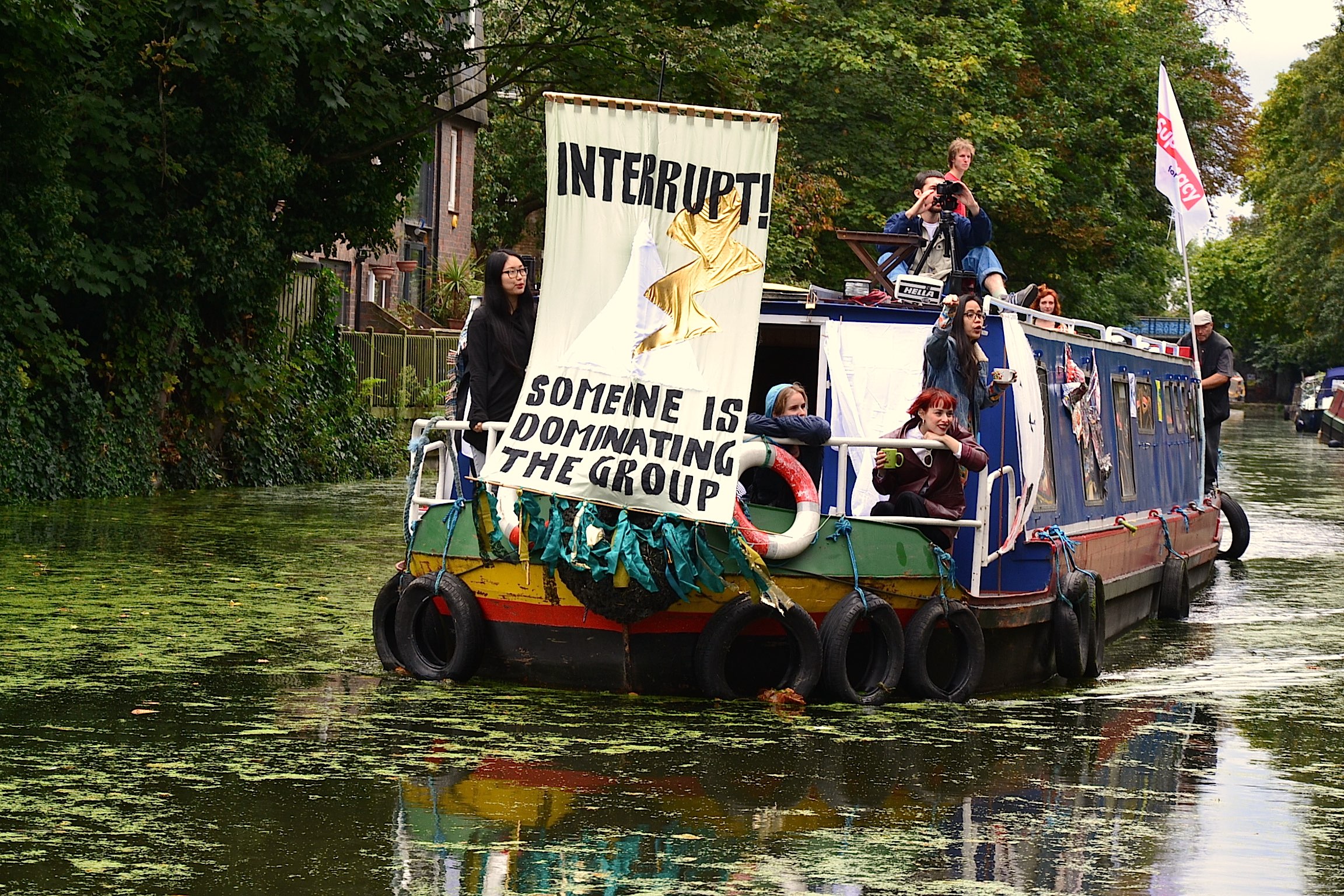 Bapor Tabo(o) is a one-day moving exhibition. It’s set on a boat flowing and gliding through the Old Ford Lock (by Victoria Park) to Acton Lock (by Broadway Market), along the Regent’s Canal, showcasing live performances by live artists, groups, contemporary dancers and movers, musical performances and spoken word. The boat’s façade is strewn with artworks flying in the form of flags, posters and banners by RAGE COLLECTIVE and artists whose works deal with political issues and concerns, serving as a stage for live works and performances to take place.

To conclude the event, the boat shall moor at an arranged place where the public is welcome to join in conversations and discussions shared with food and drinks, with a possibility to join impromptu musical jams and performances.

Babor Tabo (Tagalog, Filipino language) translates literally as Boat Dipper. It was used as a symbolism by Jose Rizal, Philippines’s national hero in his revolutionary literary novels during the Spanish colonisation to depict Philippine society at the time. It is about social classes wherein the rich and the educated class ‘illustrados’ are in the upper part and the workers, low class locals or ‘indios’ are in the lower part where the condition is horrifying and utterly inhumane with no access to the comfort and privileges of the upper part.

The format of the exhibition is a response on the scarcity of places for exhibitions, in a process of finding solutions to utilise different ways of showcasing art events and encounters. It is an exercise of exploring alternatives not just to situate artworks and projects, but one that also widens accessibility and interaction with a broader audience, as there is definitely a need to find ways to bridge from our closed groups, to try and cross the ever widening social divides.